We are pleased to announce the winner of the 8th Book Short Award!!

We are pleased to announce the winner of the 8th Book Short Award!!

“Stories from around Japan”

based on the nursery rhyme “Akatonbo”

This award was held as part of the 2021 Japan Expo sponsored  “Stories from Around Japan” project. While maintaining the themes of the previous Book Short Award, we especially collected 1,067 submissions for  “stories from various regions of Japan”.

The Grand Prize winner, “Aitai hito” by Moe Haruno, is a short story based on the children’s song “Akatonbo” (Red Dragonfly). Based on a melody and lyrics that many people in Japan have heard before, the story depicts the relationship between the main character, and a neighborhood sister, a woman he met once, and their grandmother.

inspired by a phrase in the song, this story talks about the person that we wish to see again or regret not seeing them enough.Those people are often a bitter memory that causes pain but we are often  encouraged by their presence. “Aitai Hito” carefully depicts the sense of loss that the protagonist feels, while at the same time showing how his encounter with a certain woman leads to a positive change in his life. 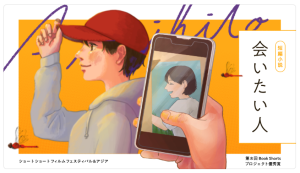 When Akane encounters Muramatsu-san sleeping on the train, she notices that her face looks exactly like someone she knows. She hopes for an emotional reunion, but as she follows her, she sees an unexpected scene.

Moe Haruno: Born in Yamagata. After graduating from Tsuru Bunka University, she transferred to an art college after working. Her inspiration for her creative work came from playing with her father’s word processor when she was a child. Her  current dream is to create original picture books and read them to elementary school children.