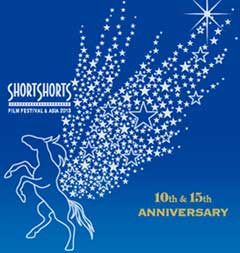 In commemoration of SSFF & ASIA’s anniversary, we have selected 15 cinematic icons (short films by and starring famous directors and actors). Below are 15 icons from all over the world.

The festival in three cities here in Japan and abroad.

The festival, five venues in Tokyo and Yokohama. In September from the 5th to the 11th, the festival will be held in Mexico City and marks the 8th year there. SSFF Malaysia will be held again in order to establish a strong foundation in Asia in November.Short Shorts Film Festival & Asia 2013 in OSAKA 2013 was held on July 19 (Friday) and 20 (Saturday), This festival, At Osaka’s "Knowledge Capital,"

We received over 5000 submissions from 120 countries around the world.

In 2013, the festival received over 5000 submissions from 120 countries around the world.

Collaborations with other Short Film Festivals

We have continuously showcased the special selections from Kaohsiung Film Festival, and also from Asiana International Short Film Festival, known as the large short film festival in South Korea.

Commemoraing the Festival’s Anniversary years, Short Shorts Film Festival & Asia began supported FILMAID ASIA. In recognition of our commitment, MOËT & CHANDON supported the Opening GALA Party. Attending guests including past festival jurors signed the special 6L Mathusalem bottle of the Champaign of Cinemas, MOËT & CHANDON, and the signed bottle was submitted for charity auction. The raised funds, along with donations from attending guests were sent to FILMAID ASIA.

For 2013,we selected 47 films out of a total 3529 submissions. Tendencies in submitted works normally reflect larger current situations around the world.
This year, participating countries and regions total 27. We've hit an all-time high! You can glimpse some countries, too, that rarely appear, including Estonia, South Africa, Venezuela, Morocco and Colombia. For the special screening was "GYPSIES,TRAMPS & THIEVES", staring popular up-and-coming Hollywood actress Amanda Seyfried.

This year, 2013, we received 759 submissions, selecting 17 films from this total. The impressively high quality of South-East Asia production is strongly apparent this year. This includes not only our usual participant countries, such as Iran or South Korean, but also shorts that will screen from various other locations, including Indonesia, the Philippines, Thailand and Singapore.
"Yokohama Dream" produced by director Amir Naderi, and other films were received as special screening,

This year we introduced 16 short films out of 295 submitted works.
The Kiryu Film Festival special film "Gentleman's Bride"and other films were received as special screening

"STOP! Global Warming Competition" which was established with the "Challenge 25 Campaign", is now changing to become the "Save the Earth!" Compttition. This year, we have selected 7 short films from 155 submitted works gathered from around the globe. 'Desperate Housewives' star Felicity Huffman's Lesster, which she both appears and directs, was screened.

supported by Digital Hollywood The CG Competition is marking its third year and features CG short films from around the world. Once again this year, we will screen amazing short films sected from 147 entries, that use the latest in CG technology that will surprise and excite you. The line-up chosen by the selection committee will be full short films with a variety of perspectives that not only features, CG technology, but also manage to entertain and move your heart as well.
Running for the 3rd year, the short "8BITS" featuring the video game world. and "Kick Heart", a short from Production I.G that was supervised by Director Mamoru Oshii. Were received as special screenings.

A special program of selected music shorts, ranging from artists’ music videos to original music shorts made by filmmakers who were inspired by a particular artist’s music, will be screened. And you won’t want to miss music shorts from abroad by artists like David Bowie, and a short staring Jake Gyllenhaal.

In celebration of our milestone year, we're proud to present the "Anniversary Program." Specially selected shorts featuring world famous directors and actors will be screened in programs 1 and 2. A film made by Academy Award-winning Life of Pi" director Ang Lee whilst he was at NYU will screen alongside "The Wholly Family", the latest short by "Twelve Monkeys" director Terry Gilliam, and a short by Shia LaBeouf, famed for the "Transformers" series. In addition to this, we will screen two of George Lucas’s early shorts that we introduced in our inaugural festival. In program 3, films carefully selected from amongst Grand Prix and Audience Award winners from the past years will screen beside each other. From the 1999 American Short award-winning film "Puppies for Sale" (starring Jack Lemmon) to the more recent 2011 Grand Prix winner "It’s me. Helmut", this is a program that allows you to revel in the festival's history to date. For program 4, the staff of SSFF&ASIA has selected films from the festival’s 15-year span to present in one select line up. The staff struggled at great length to choose from amongst the masses of films, producing a program that gives you another chance to catch films expressing the festival's abundant variety.

As an Academy Awards® accredited short film festival, we proudly introduce short films including nominated and winning shorts from the 85th Academy Awards® held this year. This is a unique opportunity for you to see the very best from the world of short film!

For this festival, CANON and YouTube Space Tokyo have formed a collaboration based on the concept of creative support for up-and-coming creators. With his shooting techniques and unique view of the world referred to as the "color of Tsutsumi", director Yukihiko Tsutsumi, who continues to bring innovation to the video industry, has been invited to lecture and hold a workshop.

Known for films such as "Chronicle of MY Mother", which received the Montreal World Film Festival Special Juror’s Grand Prix in 2012, and "Climber’s High," director Harada will draw from his wide experience as a filmmaker to lead a discussion geared towards aspiring visual creators and filmmakers on the future of the filmmaking and visual image industry.

Lexus, in collaboration with The Weinstein Company, have gathered 5 directors from Japan, U.S., Europe, China and Asia Pacific to make Lexus Short Films. We will screen these 5 shorts with the theme "life is amazing" that these 5 directors have created through their vision that depicts the essence of "progressive luxury," the Lexus brand's vision.

With the power of sports and the visual power of short films. Football themed short films from around the world screened in a special program which began in 2011. Along with a special invitation screening of a short film by Fernando Meirelles (director of "City of God") that depicts the final goal made by football legend Pele, we presented a premiere screen of "Koyuki's Wandering Football," a joint production by J-League & SSFF & ASIA.

Following the collaboration titled the "Let’s Travel! Project", between The Japan Tourism Agency (Ministry of Land, Infrastructure, Transport and Tourism) and SSFF & ASIA, which was formed to promote tourism in japan, AISFF also started up "Traveling Shorts in Korea" in 2010 with travel and tourism as the theme. The selections for this 3rd year’s program comprise a line-up that shows, with an even stronger appeal, the wonders of Korea. Discover for yourself the depth of all that Korea has to offer.

2013 marks the 20th anniversary of diplomatic relations between Japan and Croatia. Additionally, in July 2013 Croatia will join the European Union, and it will be expecting to welcome even more visitors from Japan. The celebrate this, we'll present a "Focus on Croatia" program. Ranging from dramas to experimental shorts, you can enjoy the impressive breadth of Croatian short film.

To discover and nurture the new creative talents in the world of cinema, and to promote throughout Japan the unknown attractions of Nagoya, up-and-coming filmmakers made short films located in Nagoya.Short Story NAGOYA, a program that will include 3 short films shown for the first time to a general audience as well as 2 shorts from past screenings

A specially selected program including the first full-scale SFX TV movie in Japan, "Ultra Q," as well as "Neo Ultra Q" which made it’s return after a half-century absence. Enjoy the all-night screening featuring the passion and the filming technology of Tsuburaya Productions that’s made dreams and imaginations a reality for over 50 years.

Six difference awards were presents at the Opening Ceremony. The "Spotlight Award was awarded for work that contributed to the spread and awareness of short film culture. The Special Mention was given for contributions to the visual media industry through short film. MOËT STAR AWARD was given to the most promising star from this year’s Selection, who shares the five common philosophies of MOËT & CHANDON and SSFF & ASIA. Music Shorts Cinematic Award (Commissioner’s Award, the Japan Tourism Agency ) And Visual Tourism Award Special Mention were given for works that worked that worked to promote tourism through visual creativity, topicality, and potential.

Invited guess attended the Award Ceremony on June 9th, Which was held at the Jingu Kaikan, Meiji Shine. Jurors of the various competitions gathered here to announce the best short films that were chosen out of each of the competition, with the Grand Prix chosen from among the main competitions The Grand prix wining short film is eligible for nomination at next yesr’s Academy Award(R).

The day of the fist ever opening 1999. Welcomed the big audience with free admission.

Save the Earth! Competition Jury