（Event Report）SSFF&ASIA Online Closing Seminar NFT×Cinema feat. The Rhetoric Star (NOMA × CoinPost) from being an audience to being a participant

（Event Report）SSFF&ASIA Online Closing Seminar NFT×Cinema feat. The Rhetoric Star (NOMA × CoinPost) from being an audience to being a participant 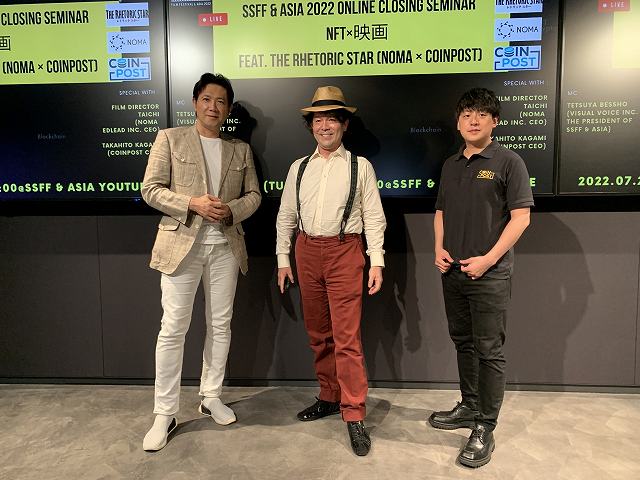 Short Shorts Film Festival & Asia (SSFF & ASIA), one of the largest international short film festivals in Asia accredited by the US Academy Awards®, introduced a film called “The Rhetoric Star” at the festival award ceremony in June. It is a film about the dark secrets and expectations regarding Cryptocurrency. We also announced the concept of the NFT Global Cinema Market, a collaboration with Visual Voice Inc.

At the online closing seminar of the film festival held on July 26th, Tetsuya Bessho, president  of the film festival, and Taichi, director of EDLEAD who is also in the international film production team NOMA. Mr. Takahito Kagami, CEO of CoinPost Co., Ltd., who operates the online media “CoinPost” that distributes domestic and foreign news about cryptocurrencies to investors, the three took the stage and talked about new filmmaking methods in the Web 3.0 era, movies that will change with NFT.

The LIVE Streaming was performed from the innovation lab “MIRAI LAB PALETTE” operated by Sumitomo Corporation.

The film festival and each person were introduced, followed by an explanation of the ongoing project “The Rhetoric Star”. Director Taichi said, “(This work) is a story that begins with cryptocurrencies and crypto-assets, and it has positive and negative images to it but it will unravel as a social suspense. ”

As the number one crypto-asset-related media in Japan, they will be cooperating with the marketing side as well as challenging new production methods in addition to crypto-asset themes.

This project which was announced at the Cannes Film Festival will have the soundtrack producers of “Harry Potter” and “E.T.”

The Current State of Film Production

Regarding the current state of film production Mr. Kagami said that “The web media business is the most easily consumed among all the other media platforms. On the other hand, film production can be time consuming and difficult to produce. When something is difficult to make we usually expect better results, because of the time and money we spend. By connecting the creators and their fans it will make the producing process easier and will shed a light to many creators.”

Director Taichi said “It has only been 127 years since movies came to life, but it is very old. The industry itself is growing but the production process is not. So this will be the way to evolve the process”

Bessho talked about the flexibility this industry has and the system the japanese film businesses have. “It is the matter of how we will adapt and change it to the 21st century”, and how NFTs comes into it all.

Mr. Kagami explained the four characteristics of NFT are

Furthermore, regarding Interoperability, “information that was previously known only to member management companies is now open to people who want to participate in production with NFT”,

The investors of film production and the community that is quite interested in movies has great value, it will be a great opportunity to approach and connect those communities and films. He gave us a few examples of it. As for “programmability,” he introduced the unprecedented innovativeness of community management based on its own rules such as voting. Director Taichi said, “Until now, there was no verbalization of the process of filmmaking, and Japan tends to not speak clearly. However, when this generation changes and uses NFT, it is possible to optimize the production.” 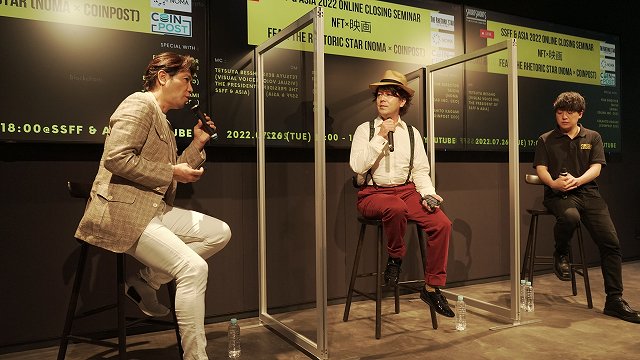 The Difference Between Crowdfunding and NFT

Mr. Kagami said, “Crowdfunding is a contact between individuals and movies. Making it a sell and buy contract. On the other hand, NFT users will belong to a semi-anonymous community of supporters. Always having an identity. Individuals can participate in problems and issues while making movies together. the management side can make operational changes that directly and continuously give and receive benefits.”

Director Taichi said, “Until now, movies have been traded as copyrighted works and commodities, but NFT subdivides movies, so that each of the 150 people involved can be in charge of one thing. It enables one process to be valued and made economical.” He conveyed his view of the world that the movie is “a collection of huge values ​​converted into NFT”.

In addition, director Taichi said, “If an animator draws a line and converts it into an NFT, it can be linked to the person with value.”

Following the example, Mr. Kagami said, “When co-producing an animation, even if the audience rating of the first series were not good, knowing that there are fans will allow them to continue making seasons.”

Crowdfunding was mainly aimed at Japanese users but with NFT it can be global. Individual users from around the world will make a community. This will change the production process.

In addition, regarding the merits of making these processes transparent with blockchain and being able to prove transaction history, and if the world of the Metaverse expands, that can be used as a trigger for various services. 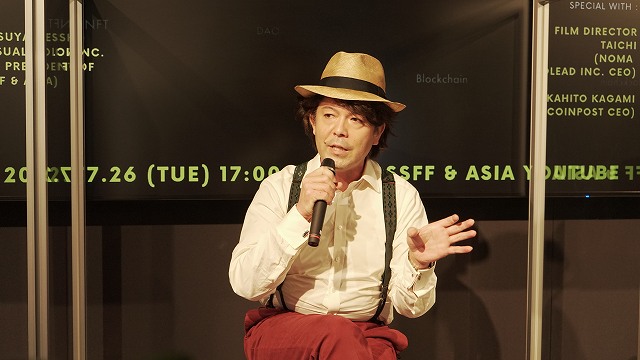 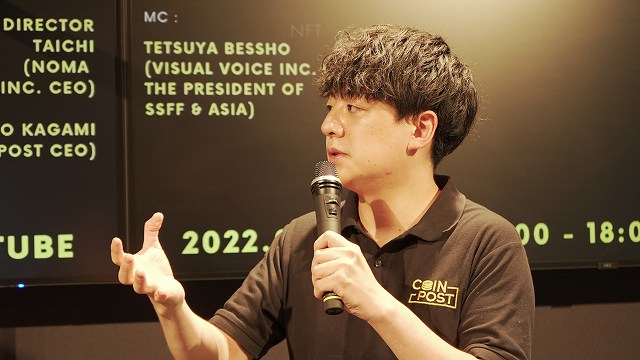 How Can NFT Change the Producing Process? Web 2.0 to Web 3.0

Bessho says, “The means of communication changed from FAX to Email in the Web2.0 era. The change for Web 3.0 will be as great”.

As for the current use of NFT in the world, Mr. Kagami said, “In the world of movies, funding is a big deal. The structure of shareholders and stocks, and returning profits is difficult. With NFT, it is possible to know the people who have been participating from the beginning, so when there is a big profit from the box office, it is possible to set up a large return to the early investors.”

Director Taichi said, “Everyone is interested in NFT and is looking for what it can do. ”

“Movies are made by humans. By using NFT technology and its techniques, each artist can be valued more. For example, the cycle of movie directors having to find sponsors to fund their movies will be broken down.”

In addition, Mr. Kagami said, “NFT can reach people globally, which is a big point.”

Regarding the production process and the points where the creators and backers are directly connected (no middleman fees), Mr. Kagami said, “Centralized leaders are absolutely necessary for film production, but creators want to try more things, and search for people that have the same ideas. I think it will be more important to create an environment where we can network.”

Director Taichi borrowed the words of Mr. Nakatsuji, the producer of “The Rhetoric Star”, saying that in the era of Web 2.0, movies were something to watch, but in the era of Web 3.0, movies are something to participate in”. “In the same way that we have moved from the age of listening to music to the age of singing karaoke, and the age of reading information in newspapers has shifted to the age of information on social media, individuals who have been consuming movies can now make movies.” he said. 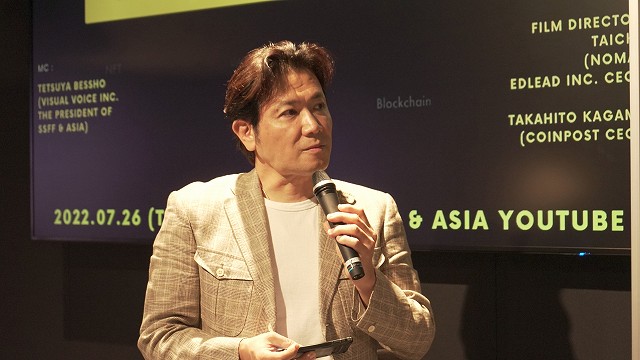 A Community Driven Film and its Possibilities

Mr. Kagami said, “While many people are wondering whether it is possible to make it happen, ‘The Rhetoric Star’ is experimenting alongside the production. I want to make it a model for all creators.”

When Bessho asked about the feasibility of process marketing to produce a movie together, Director Taichi clarified, “It’s very possible. Japan’s movie content ranks third in the world after Hollywood and China. Hollywood is starting to age, and France, Italy, and Germany have strong film cultures, but from the perspective of making profits from it, they’re not as strong as Japan. The world  is now heading towards the Asian era. One of the things we should do is NFT.”

In the final stage, Bessho asked what short films and NFTs, film festivals and NFTs can do? In response to the question, Mr. Kagami said, “Film festivals and communities are a good fit. I think we can create a new framework for evaluating a film, the general public will evaluate films that have not been recognized by most. Multilingualization is also developing, so I think it would be possible to create a community by creating a system for evaluating each other, a place where even non-professionals can participate, like a video competition. ‘

Mr. Kagami also explained the necessity of literacy. Kagami said, “While anyone can enter the world, there are still many uncertainties. As people’s thoughts and perspectives continue to change, you cannot wait for the right time to start.”

At the Q&A, there were questions about the NFT players. Director Taichi said, “There is a chance for every artist to be famous,” and Bessho also said, “You can be the player to watch.”

Bessho would like you to check out the “The Rhetoric Star” project. A web 3.0 project page by Visual Voice Co., Ltd., which is also linked to the film festival, has also started.  “We would like creators from around the world to knock on the door and make a great community together.”