One of Asia’s Largest Short Film Festivals in Tokyo,
accredited by the Academy AwardsⓇ

Special support from Sony for the Official Competition, gateway to the Academy Awards®, continues and
Over 900 filmmakers have entered the
Newly Started Smartphone Film Competition

This year’s theme is “CINEMADventure” – a blend of the words CINEMA, AD (advertisement), ADVENTURE, and VENTURE.

How are filmmakers around the world creating and embracing the world of cinema? How are they venturing to make adventurous, daring films? In recent years, many filmmakers have even branched out into the world of ads, or advertising. As an international short film festival, we hope to bring together all filmmakers, audiences, and supporters to experience our “CINEMADventure”.

The pandemic has changed so much of our everyday lives as well as what we value in life. Despite the darkness the world may seem to be in, many filmmakers are optimistic and are welcoming new challenges everyday. The 23rd SSFF & ASIA will also welcome these new challenges to bring hope to our society through the visual language that is film.

This year, we are proud to be collaborating with Sony once again, the sole supporter of the Official Competition (International, Asia International, and Japan competitions). Sony has long supported the dreams of creators as an entertainment company powered by the latest technology. 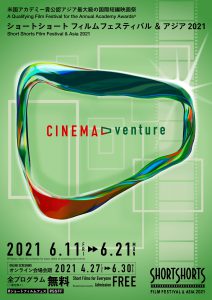 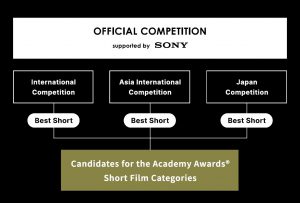 This year we are proud to be collaborating with Sony once again, the sole supporter of the Official Competition (International, Asia International, and Japan competitions). The competition may serve as an opportunity for filmmakers to secure a spot in the Academy Awards’ Short Film category.

For this year’s 93rd Academy Awards, the following short films from last year’s Official Competition selections have been nominated: “White Eye” by Tomer Shushan and  “The Present” by Farah Nabulsi.

Throughout the duration of the festival, we will also be awarding filmmakers in the following categories: CG Animation, Cinematic Tokyo, Branded Shorts, Musical Short Film Pitch, Shibuya Diversity, U-25 Project, Book Shorts, Visual Tourism,  Save the Earth, Biogen, Spotlight, Best Actor, and Audience.