HOME Topics ListReport: The short film “Snow for Water” depicts the daily struggles of civilians during the Bosnian War.

Report: The short film “Snow for Water” depicts the daily struggles of civilians during the Bosnian War.

On June 1st, at the Futako-Tamagawa venue, the “War and the Power to Live Program supported by Red Cross” was screened.

In places throughout the world even at this very moment, war and violence in all forms are disrupting the lives of many, stealing from them the ones they love as well as their everyday lives. With the cooperation of the International Committee of the Red Cross, we have been showing this program at the film festival for the past four years. For people living in peaceful Japan, we hope that we can reaffirm the importance of showing compassion to others and lending a helping hand by having them familiarize themselves with the varying circumstances serving as the backdrop for the many different lives and emotions of the individuals appearing in the program.

With today being a Saturday, it may have had something to do with Futako-Tamagawa being extra lively with many shoppers and families. Thanks to this, we were able to have many people come to the screening as well. The films screened from the “War and the Power to Live Program supported by Red Cross” Program 1 were those from: Bosnia, France, Ukraine, Croatia, England, Germany, and Finland.

Following the screening, a question and answer session was held with the director of “Snow for Water,” Christopher Villiers.

Summary:
The short film is based on a true story that took place in the city of Sarajevo, backdropped by conflict in Bosnia and Herzegovina. Two children living in the city are asked by their father to collect snow and put it in the bath. Obeying their father’s command, the children desperately attempt to ignore the distant sound of cannons and sniper fire in order to provide water for their family.

The first thing the director did was greet the audience, saying: “This is my first time in Japan. I am honored to have the opportunity to share my work with everyone here. Every one of the seven works screened today was extraordinary.” 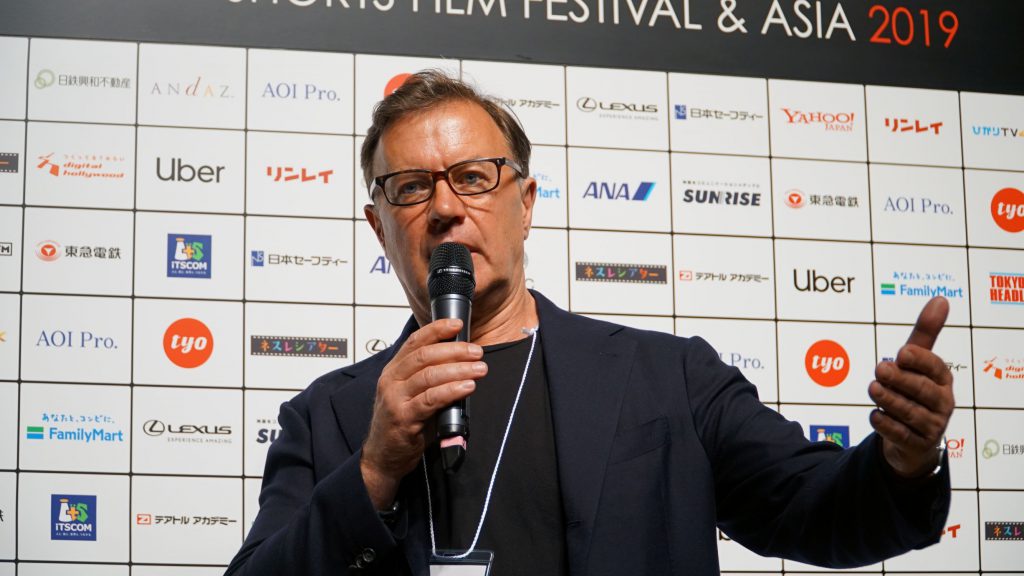 Immediately, there was a hand raised for a question by one of the audience members. The male audience member asked: “Thank you for the heart-rending film. I have two questions. Why was the Serbian military attacking civilians? And what is the situation now in Sarajevo?”

In response to this, Christopher Villiers, with a British accent, spoke of the Bosnian War. (While the film takes place in Bosnia, the director himself is from England.)

A long time ago there was a country known as the federation of Yugoslavia. In a town known as Sarajevo in Bosnia, which was part of the federation, lived Muslims, Christians, members of the Russian Orthodox Church, and Jewish people. So many races, religions, and cultures resided in this town that it became known as the City of Jewels. This town was the heart of Yugoslavia.

However, when Yugoslavia was split into five or six smaller countries, in an attempt to expand their territory, the Serbian military invaded Bosnia and started killing anyone suspected of being a Muslim. It was in other words, a form of ethnic cleansing.

The City of Jewels became a living hell within just four years, a short time span even by today’s standards. Geographically, Sarajevo is located at the bottom of a valley, and the Serbian military surrounded them from above and ruthlessly attacked them with gunfire, sniper fire, and bombs. They destroyed infrastructure like water, gas, and electricity, even putting poison in the rivers. Hiding civilians had to cut down trees to warm themselves in their homes, and when the trees were gone, they used their furniture, and when the furniture was gone, the books, and when the books were gone, they burned their shoes to survive. This is a story from only 25 years ago. 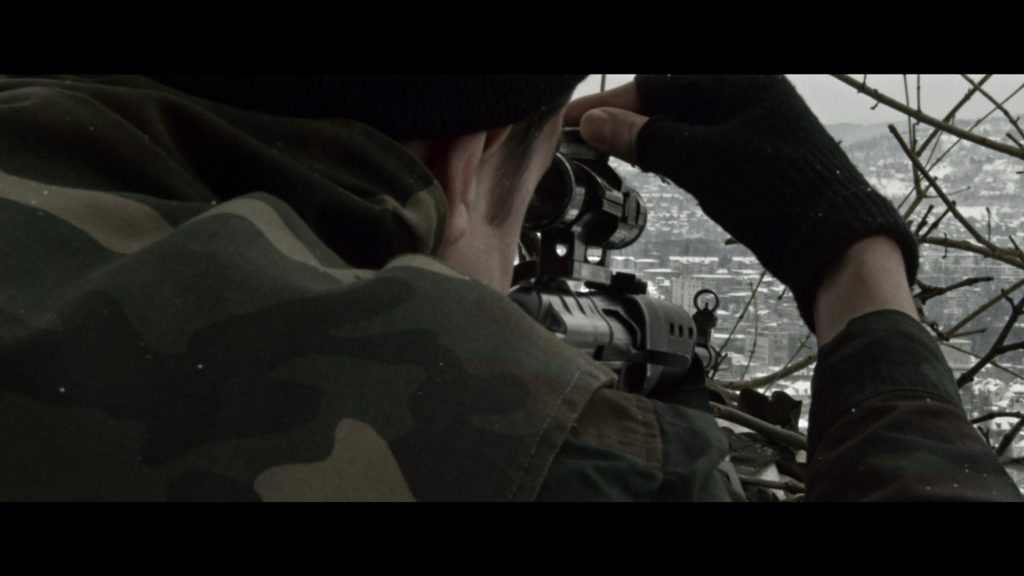 The Olympics and the Paralympics are being held in Tokyo next year, aren’t they? These tournaments are meant to celebrate humanity. In 1982, when the Winter Olympics was held in Sarajevo, I was watching the tournament from London. Who would have imagined that ten years later they would be killing each other?

Today, Sarajevo is a modern city. There are concrete buildings just like in Japan, and many skyscrapers. However there are buildings where you can still see bullet holes that have been left intentionally so nobody forgets about the scars of war. There are many holes left in the roads from shells. These holes have been painted with red paint and are called “Roses of Sarajevo.”

Seven years ago, because of a production I was involved in at the time as an actor, I went to a film festival in Sarajevo. I was drinking coffee at a café with a young Bosnian who was volunteering there. I asked her if she had been in Bosnia during the conflict, and she told me that she had, and that she experienced the war first-hand from the age of six until the age of ten. The most vivid memory from that time, according to her, was when her father told her to go collect snow with her brother. There are still many people in Bosnia suffering from the trauma resulting from war.

The second question was from a girl who appeared to be around elementary school-age, who raised her hand and asked Christopher Villiers: “What made you want to create this film?” The director smiled gently before answering.

My sister is a producer who has made many achievements in the film industry, even having received an Oscar (see below) at one point. She asked me once, “You keep on saying that you’re going to become a director someday, but when are you going to actually shoot something?” Following up on that, she told me: “If you’re going to direct a film, it should be something that takes you out of your comfort zone. Something brave, extraordinary, and true.”

When she told me that, my thoughts immediately went to the snow story. It was one of the most idiotic ideas I’ve ever had. I ended up filming with two children in a place that was negative 25 degrees, surrounded by a foot and half of snow, without even knowing the local language. But, it was the film I had to make. 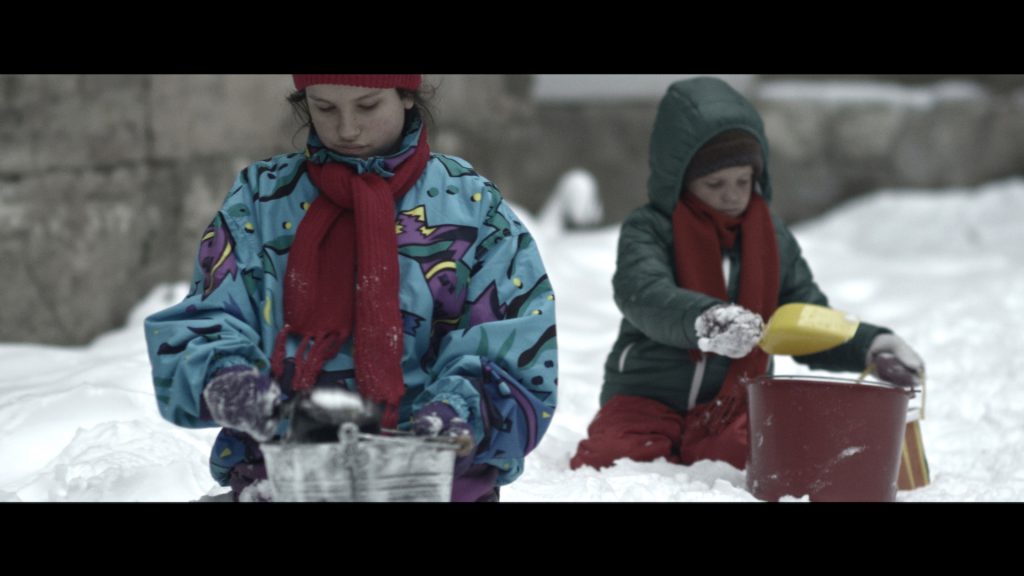 After the question and answer session concluded, the audience clapped, and Christopher Villiers had a satisfied expression, with his features resembling that of another English actor, Roger Moore. We hope to see future works from him as both an actor and a director.

The “War and the Power to Live Program supported by Red Cross” can be seen on June 7th at the Space-O hall in Omotesando Hills at 3:40pm. Don’t miss this opportunity to go watch it on the big screen.

At the online venue, you can also watch four works from the “War and the Power to Live Program supported by Red Cross,” so feel free to check them out as well! 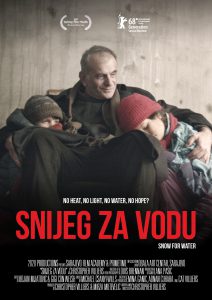 Note:
The film No Man’s Land is a 2001 Bosnia and Herzegovina war-comedy, directed by Danis Tanović. The film won the Academy Award for Best International Feature Film at the 74th Academy Awards (2002).
(As a side note, the child actors who played the siblings in “Snow for Water” are Tanović’s real children.)