HOME Topics ListREPORT ”Imaginary Bullets” - A satirical portrayal of the absurdity of the adult world through children’s comedy.

REPORT ”Imaginary Bullets” - A satirical portrayal of the absurdity of the adult world through children’s comedy.

Report: ”Imaginary Bullets” – A satirical portrayal of the absurdity of the adult world through children’s comedy.

On June 2nd, at the Futako-Tamagawa venue, Program 2 of the “War and the Power to Live Program supported by Red Cross” was screened.

In places throughout the world even at this very moment, war and violence in all forms are disrupting the lives of many, stealing from them the ones they love as well as their everyday lives. With the cooperation of the International Committee of the Red Cross, we have been showing this program at the film festival for the past four years. For people living in peaceful Japan, we hope that we can reaffirm the importance of showing compassion to others and lending a helping hand by having them familiarize themselves with the varying circumstances serving as the backdrop for the many different lives and emotions of the individuals appearing in the program.

Following the screening of Program 1 the previous day, the selection from Program 2 included 7 works from Iran, Spain, America, France and the Netherlands.

After the screening, a Q&A session was held with Sean Oliver, the director of Imaginary Bullets. The host of the day, DJ JOHN, said to the director, who looked sharp in his suit, “Firstly, I’d like to give you the Best-Dressed award”. Oliver greeted everyone in the hall with “Konnichiwa!” 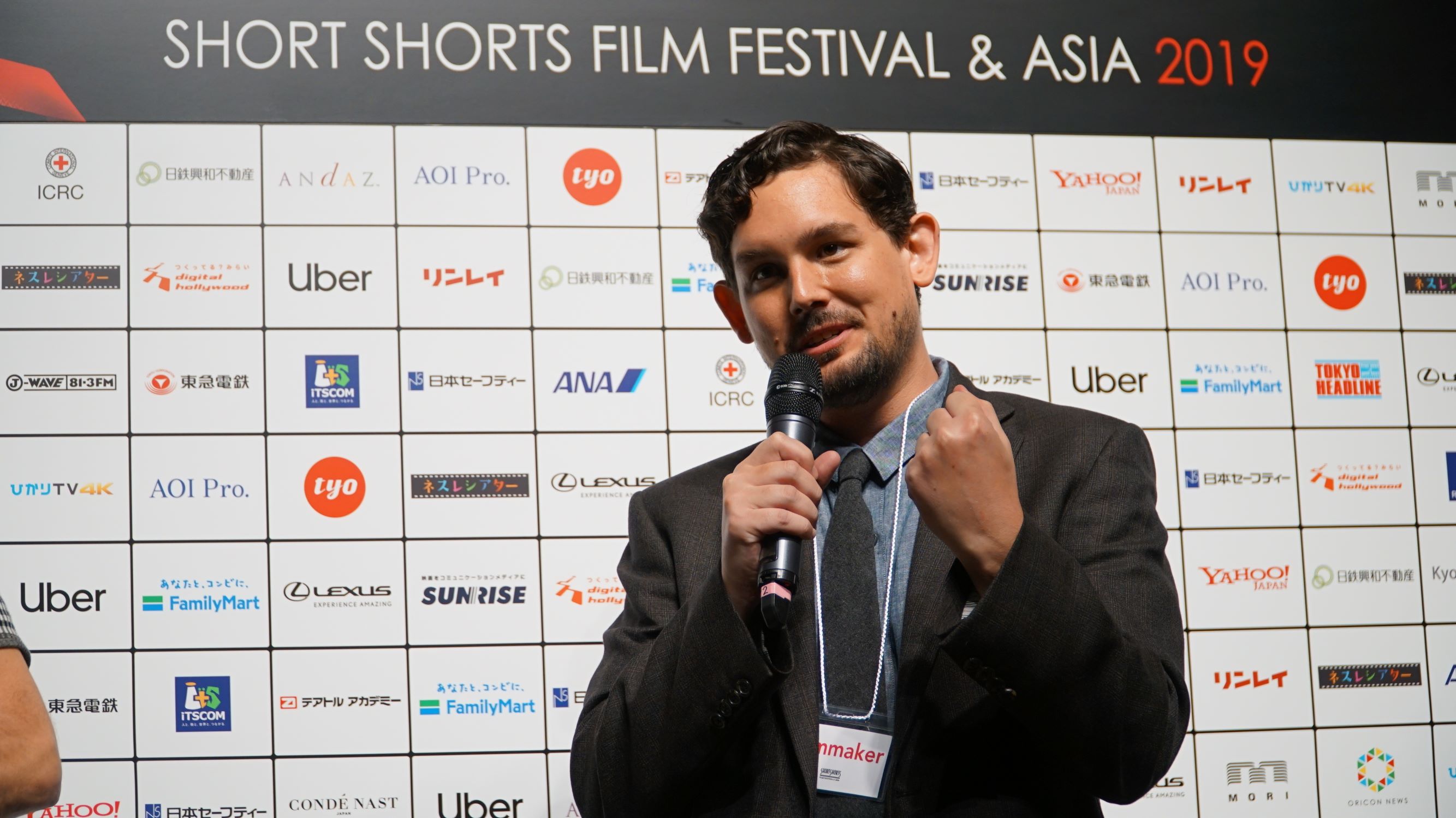 Synopsis: Two children are among the first of humanity to discover a shocking phenomena, and as the world spirals into chaos they make a grand discovery in this bleak new world.

There was a question from an audience member, who asked in English “Where did the idea of this work come from? Was your intention to criticize the situation of gun control in the United States?”

In response, the director answered with the following:

～～～
No. Originally, my intention was to create a light hearted story as a joke, rather than a moving story with a strong message. The idea stemmed from the thought, “if there’s some kind of magic that allowed a wish to come true, that wish would afflict the lives of the people around them…” This thought has been with me for about 6-7 years, and the story grew naturally.

Then I realized that various issues such as gun control were related. Although at the start of the production there were already debates about gun violence, the issue continued to escalate with many incidents like school shootings. As a result, the connection between my comedy work and gun control issues grew stronger.
Regarding our stance on gun regulation, we do not intend to send out any specific message, but rather create a “conversational topic” about gun regulation.

～～～
The second question came from a woman, and she asked “In the middle of the movie, there’s a scene where there are adults playing with air guns. What is the meaning, or message of that scene?”

The director answered with the following.
～～～

While the world built by parents (adults) is in chaos, the children are driven away somewhere. However, the adults have no idea about where the children are or what they are doing. This can be seen as apocalyptic. We wanted to emphasize that aspect in this symbolic scene.

If you portray the theme directly, it’s easy for the work to become very serious. I wanted to include elements of comedy in my work. I want to have a laugh even in the darkest, and saddest times of my life. The main purpose of this work was to illustrate “hope”.

I hope Sean Oliver enjoys his first ever trip abroad, here in Tokyo.

At the online venue, you can also watch four works from the “War and the Power to Live Program supported by Red Cross,” so feel free to check them out as well!
https://www.shortshorts.org/2019/ja/online/online_wp.php